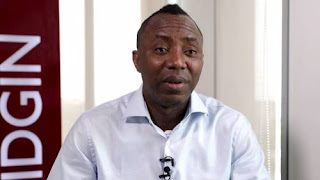 According to the report Mr Omoyele Sowore was arrested in a gestapo manner at the Appeal Court premises today in Abuja after he was leaving the court with other members of African  Action Congress (AAC) who attended a court session with him to demand his reinstatement as the legitimate   Chairman of the party.

The police has said they're acting on a petition by Ned Nwoko. To us in RSM this is political policing and attack on right of Mr Omoyele Sowore.  Has we write  Mr Sowore is still with the police at their station-abattoir former SARS office along AYA-Apo road by Guzape junction in Abuja. It's ridiculous that the Nigeria police will result to lay ambush on Mr Sowore to arrest him when he can be invited. Mr Sowore is popularly  known in Nigeria as foremost journalists , human rights activist and a former  presidential candidate.

We condemn the arrest of Mr Omoyele Sowore, Mr Ned Nwoko is know for using police to harass and oppress ordinary citizen. Just few weeks back Ned Nwoko was named to have been the one that wrote a petition against a popular aphrodisiac seller Hauwa Saidu popularly known as Jaruma and she was later detained at Suleji correctional facility.

Similarly in May last year  a  former beauty queen, Pamela Ifejoku, had in a viral video on her Twitter page accused Nwoko of putting her father in jail and causing her mother to spend her birthday in prison because their community resisted his attempt at land-grabbing.

Many poor Nigerians have been  imprisoned in order of Ned Nwoko by the Nigeria Police, to us Mr Sowore is well respected Nigerian that shouldn't be arrested on a petition by Ned Nwoko. The police would have invited Mr Sowore and settle the matter if need be. Attempt to harass Mr Sowore in order of Ned Nkowo will be resist with protests.

We demand immediate release of Omoyel Sowore and end to continue political policing. Mr Ned Nwoko isn't above the law and mustn't be treated better than any  Nigerian.

The Nigeria police must  prevent itself from been used to oppress ordinary Nigerians. Which Mr Ned Nkowo is notoriously known for.

We call on Nigerians to demand end to political policing and abuse of people's right, Nigeria must be rule on rule of law and not gangsterism.