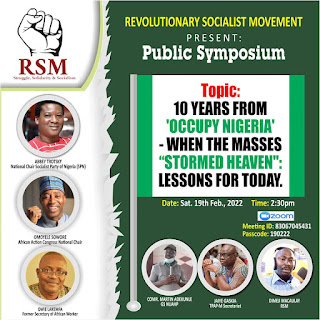 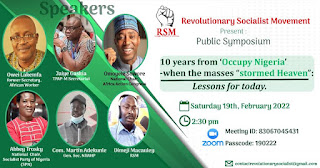 Revolutionary Socialist Movement –RSM– invites you to a public discussion, under the title

10 years from “Occupy Nigeria” – when the masses “stormed heaven”: Lessons for today.

As we all know, ten years ago a mighty movement shook Nigeria. When the   Goodluck Ebele Jonathan (GEJ) removed the fuel subsidy and increased the price of  Premium Motor Spirit-PMS, a huge movement broke out after the call of the trade union centres for indefinite general strike and mass protests.

The strike was very successful, communities engaged in self-security and voluntary pickets to enforce the strike peacefully. Both the formal and informal economy were shut down, from airports to seaports, from roads to railways. Each and every one of the eight days of general strike witnessed mass rallies and community protests. There was a high level of discipline, class consciousness and solidarity throughout these 8 days.

The same issues are posed today. Despite the rising oil prices and the massive profits accrued from this, this is concentrated in the hands of a tiny minority, the ruling class, while the mass of the population is living in poverty.

As we write there are queues at different filling station across Nigeria. This is after the federal government announced that the regime will not remove subsidy.

The regime has attempted to increase fuel pump price by removing the subsidy, but last month it was forced to retreat. This however is only temporary. They are going to come back on this, when they feel that conditions make it easier for them to impose their plans. They say that they will increase the fuel pump price in order to use the subsidy to support transportation of ordinary Nigerians, but this is just another one of their hypocritical lies. The fact is they don’t care about the poor.

We need to know our enemy and plan our fight back.

RSM invites you to join the discussion on Saturday, 2:30pm

Speakers are from trade Union, social movement and left and radical parties. They include:

We humbly urge you to take part in this discussion.