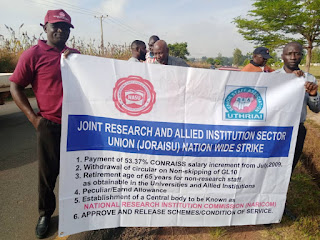 •             ONLY A MASS PROTEST OF WORKERS IN RESEARCH INSTITUTES CAN FORCE GOVERNMENT TO MEET THEIR DEMANDS.

Workers and Youth Solidarity Network extend solidarity support to the staff unions in the Research Institutes across Nigeria. It is outrageous for the Federal Government not to implement the 10-year agreement reached with the unions since 2010. As a result, Research Institutes across the federation, have embarked on strike action since November last year to press home their demands.

Workers and Youth Solidarity Network supports the demands of the Unions and calls on the Federal Government to meet them.

The striking Unions’ demands also include, among other demands:

•             Withdrawal of the circular on non-skipping of salary Grade Level 10 (NICN judgment in favour of trade unions and others).

The ruling class in Nigeria are responsible for this strike and the Nigerian people should place the blame for this situation on the irresponsible and irresponsive Buhari regime.

We, in Workers and Youth Solidarity Network, strongly believe that the importance of research to the development of a nation can never be overemphasised. The crisis therefore is a result of the fact that the ruling class, at the same time as looting the resources of this country, put little investment in the research institutions. This is particularly criminal given the present covid 19 pandemic crisis, in Nigeria and all over the world.

Workers and Youth Solidarity Network offers its full support to the working researchers and their unions. We call on the Federal Governments to immediately agree to the demands of the research workers, and implement the 2010 agreement.  The government has refused to offer a round table meeting with the striking unions.

We call for united actions amongst the unions involved and to continue with public rallies, like the ones that have been organised in Ibadan, Oyo and other parts of Nigeria in the past months. Such rallies need to be replicated in every other part of Nigeria where union branches exist.

Workers and Youth Solidarity Network strongly believe that, particularly in a globalised world, the role of research in academic institutions is absolutely necessary for the sustainability and development of any economy. It is vital to have knowledge-driven growth and development based on innovation. The quest for knowledge is the basic principle behind research. The Buhari regime has no serious approach to research and development, it continues to take the role of the Research Institutes with levity.

We, in Workers and Youth Solidarity Network, at the same time as supporting the demands of the striking workers, fight for the formation of a mass workers political alternative, to build a force that can bring a government of the working class and the poor to power, with a socialist program. It's only when workers who are under attack fight to build such movement and fight for political power that we can expect to resolve the crisis in education and the Research Institutes but also the general crisis that is inherent in the present situation.