For a Mass Movement to end gender-based violence 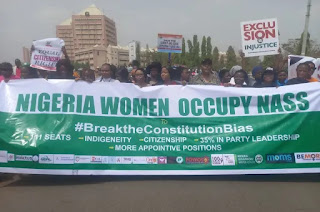 For all the past years, capitalism and patriarchy have been “on top of the game” in Nigeria. We should never fail to make clear that the high level of corruption, the inequality, the killings, the injustice, the class exploitation of the poor by the rich and all menaces that befell us in the history of our country, are a result of the capitalism system that we live in.

As much as all the above evils thrive in our society, so does patriarchy (the idea that men are superior human beings) and the oppression of women. Women have been subjected to all sorts of oppression, not excluding sexual harassment, rape and even murder.

Despite being in the 21st century, still a higher percentage of girls compared to boys do not have access to formal education, as women are still being seen as inferior. It is still widely believed that women can't contribute to the growth and development of the nation, should not attain political positions etc., despite the popular saying “No women, no nation”.

The  kidnapping of Chibok girls, Dapchi and so on with  “Bring Back our Girls” campaign is in itself a crystal-clear reflection of the kind of suppression and sufferings women and girls face.

Since 1987, March 8th has been set as the International Women's Day. We need to remember how the radical African revolutionary Thomas Sankara talked about the role of women in the development of society. He said: "The revolution cannot triumph without the emancipation of women".

There is no true social revolution without the liberation of women. A nation without liberated women, is yet to be liberated. The conditions of life of women are therefore at the heart of the question of what we understand by humanity itself, here, there, and everywhere

Nigerian women joined the International Women's Day celebration across the world, to protest about the general situation of women but particularly about the fact that this year the social and economic situation of the country has further exposed Nigeria women to danger.

One of it is ritualist, the phantom belief that some organ of a woman’s body can be used to make money through a spiritual process. This is part of the barbaric conditions in which young men and women are living, trying to find shortcuts to make money amidst the continued economic crisis.

Recently we have seen scores of cases of young girls been kidnapped and organs being removed from their bodies. We have also saw the situation where women are gang raped by men of the same age range.

Recently a young women called Bamise, 22 years old, in Lagos State, fell victim to ritual killers, who raped her and later removed body parts. We have many cases like this in recent times. Bamise had simply entered a public BRT bus in Lagos and the rest is history. Though some people have been arrested in connection with her case, this is of little comfort. For how long are we going to have this kind of attacks on girls how many will lose their life before we are able to put an end to this barbarism?

We demand from the Lagos State government and the Federal government to make sure justice is done, not only for Bamise but for all other women and girls who have fallen victims of sexism, kidnapping, rape and ritual killings.

On March 1st, Nigeria’s 9th National Assembly voted on an anti-women bill which has since then sparked a movement of women against it and thus this year's March 8th “celebration” became a festival of protest.

The bill can be summed up by the following points:

·         It declines citizenship to a foreign-born husband of a Nigerian woman.

·         It denies Nigerians in the diaspora the right to vote, it denies women the ability to take citizenship of their husband's state after 5 years of being together.

·         It denies women 35% presence in party administration and leadership.

These clauses, once again, reveal how the patriarchal capitalist system still operates in Nigeria.

Since then, Nigerian women and different civil society groups have started campaigning on social media and with mass protests, using slogans such as the following.

On this year international women's day, thousands of women protested across Nigeria. Also about 2,000 women occupied the National Assembly in Abuja, to reject the new anti-women bill.

Revolutionary Socialist Movement is taking an active part in the effort to build a socialist feminist movement also posing socialism as an alternative to the present crisis of capitalism. Capitalism is responsible for the unbearable strains on girls and women. Working class women are facing double oppression under capitalism – first as workers and second as women.

On  6th of April, 2022 a  Federal High Court in Abuja ruled in favour of women. The court ordered the government to comply with the 35% affirmative action for women, which allows women occupy 35% of all appointments.

Delivering judgement on Wednesday, Justice Donatus Okorowo, said the Federal Government had the obligation to implement the 35 per cent affirmative action, accusing past governments of acting in breach of international treaties on women participation in government.

As we write, abortion is still illegal in Nigeria. RSM is part of the movement fighting for abortion rights, particularly as reports show that many women die in the hands of quack doctors every year as a result of illegal abortions.

The level of insecurity in Nigeria is also responsible for numerous cases of sexual harassment, rape and all other oppression

RSM, the Internationalist standpoint section in Nigeria, is struggling for the enforcement by the National Assembly of bills to ensure gender equality.

Nigerian working women and girls have the right to live in dignity, free from discrimination, oppression and abuse; and must be able to fully enjoy their human rights without exclusions based on gender.

RSM will continue to stand against all form of oppression against women and join with forces which genuinely strive to build a socialist feminist movement, against the capitalist system and patriarchy that goes hand in hand with it.