Time for System Change in Cameroon 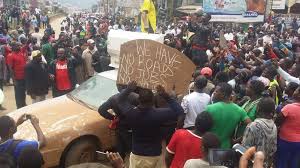 Amid an endless wave of killings of Southern Cameroonian people by the Paul Biya regime, the world seems to roll on unmindful of the atrocities, havoc and crime against humanity perpetrated by the Biya regime. Not even the waves of protest of Cameroonians in Yaounde, the capital of the country, fighting against hike in fuel and for better living standard, has drawn the attention of the powers that be to speak up or take any action against the Biya regime.

The wealth and resources of the country are indeed the real issues here. French Imperialism, and Imperialism in general, as represented by the ruling elites of the US, UK, Germany and her institutions like the IMF and World Bank, are at peace with the regime, given the continued access to loans and grants it provides the Biya regime to continue to feed fat at the expense of the wellbeing of the working masses.

This is the root of the agitation for self-determination by Southern Cameroonians who have continued to insist on an independent Ambazonian state, which would control the wealth and resources of the people of Cameroun. While the Biya regime currently sits atop it on behalf of the entire ruling elites of Cameroun. The politics of the distribution of wealth and the control of a larger share of it has seen the use of divide and rule tactics to divide the working masses against themselves along their Francophone and Anglophone divide in the country.

Cameroun came into existence in 1961 following the unification of Francophone Cameroun with the Anglophone state of Ambazonia, which is located in the Northwest and Southwest region of Cameroun, after a referendum, which saw her preferring to unite with their French-colonised cousins than be a region inside British colonised Nigeria. The current crisis, therefore, dates back to the imperialist conquest of Africa, and the fact that independence did not fundamentally change the condition of existence of the working masses, except for enriching a few nationals to come on board and continue using the Colonial state structures to exploit the wealth of the country on behalf of Imperialism and themselves. This is what neocolonialism entails, and it is a system rife in most ex-colonial countries of Africa.

The struggle for Southern Cameroonian (Ambazonian) liberation and Restoration of Sovereign Independent country are legal and acceptable under international laws. The Southern Cameroonian National Council (SCNC) was founded in 1993 by people of all walks of life and based on the merger of small cells of the movement, comprising of liberation groups, lawyers, students and workers, to fight for justice and to be masters of their destiny.

While Socialists support the right of self-determination of the people of Southern Cameroon up to the point of secession, if democratically agreed upon by a majority, we do not fail to warn that only a socialist Southern Cameroun or Ambazonia can, in reality, meet the desire for freedom, justice and bring an end to the miserable existence of the working people of Southern Cameroun. The struggle for a separate state must be combined with the making of a socialist revolution otherwise what will be achieved will not be more than replacing the oppression of the francophone Ruling elites, which  currently headed by the Biya regime, with an Anglophone ruling elite.

Socialists supporting the right of self-determination also call for the unity of all of the working masses of both Anglophone and Francophone Cameroun in a struggle to end the Biya regime and as well as ultimately fight for the socialist transformation of Cameroon and all regions.

Cameroon and Nigeria, like many other parts of Africa, remains underdeveloped because of the neoliberal capitalist economic policies they all subscribed to. This is the primary cause of poverty for the working masses. The widening gap between the rich and the poor enables the Biya regime to divide the working masses and continue his rule, with the support of French Imperialism, which would rather support Biya than oppose his attack on democratic rights, based on the assumption that breaking up Cameroun will reduce their influence, domination, and control over the wealth and resources of Cameroun, which they currently exploit.

Yet the Biya regime should be condemned and brought to trial for the genocidal war on the people of Southern Cameroun. People are killed daily; villages, markets, schools, health facilities and farms with crops are also destroyed on daily basis by the murderous Biya regime. Between 2017 and now, over 32,500 civilians have been killed, with more than 1.5 million people Internally Displaced, with more than 125,000 Refugees in Nigeria living in the border towns with Cameroon.

According to UNESCO, more than 1.1 million children are out of school in Cameroon. Attacks on democratic rights have seen over 3, 000 people in prisons as war captives. About 550 villages, health facilities, markets have also been burnt during attacks by la Republique du Cameroun forces, the Biya forces.

The so-called International community as represented by the United Nation, African Union and Commonwealth are treacherously silent, even when it was clear that self-defence, as upheld and defended by international law, is an undeniable right of all nations and people. The UK under whose rule and Trusteeship Southern Cameroun was administered, until the conduct of a referendum in 1961 and united with Francophone Cameroun, has equally ignored the happenings.

Nigeria on her part has not fare any better. On January 5, 2018, forty-seven separatist activists, including Sisiku Ayuk Tabe of the proclaimed Interim Government of Ambazonia, were arrested and detained by Nigerian authorities in Abuja. The detainees were repatriated afterwards and imprisoned in Yaoundé incommunicado for 6 months awaiting trials. They were not given access to their lawyers nor charged with any offence. And were subsequently sentenced to life imprisonment.

On May 25, 2018, Bibixy and his co-accused were sentenced to between 10 and 15 years of prison each by a military court, for acts of terrorism, secession, hostilities against the state, propagation of false information, revolution, insurrection, contempt of public bodies and public servants, resistance, depredation by a band, and non-possession of national identity card.  Same  Nigeria provided cover and protection to members of the ANC in their struggle against Apartheid South Africa, but now plays the role of handing over people to a repressive regime to sentence them to prison. This contrast of action speaks to the fact that the Buhari regime in Nigeria and their elites are not any different from the  Biya regime because they are both scared of the breakup of their pot of soup and would rather carry out repression than to peacefully grant democratic rights to any group of people agitating for self-determination. More so, the conditions in Nigeria are not any different and the ruling elites would rather not have a successful example at their doorstep to serve as an inspiration or example for self-determination agitators.

As Marxists, we support the right to Self-determination and uphold the fact that it is not a crime to agitate for it. We, therefore, demand for the release from prison of Sisiku Ayuk Tabe, Bibixy and all of those currently held illegally and imprisoned for their agitation for an independent Southern Cameroun republic.

While recognizing the right to self-determination, Marxists also call for a united struggle to end capitalism. The capitalist system and the neoliberal agenda of the Paul Biya regime have subjected many Cameroonians in the French-speaking area to poverty and unemployment. The French-speaking area has also been affected by the anti-poor policies of the capitalist system and by the attacks on democratic rights by the dictatorial regime of Paul Biya.

We, members of the Revolutionary Socialist Movement (RSM) in Nigeria, call for an end to attacks of Southern Cameroons and other regions. End to arbitrary arrests and torture of protesters. We demand an end to Cameroonian forces in southern Cameroon. We call for solidarity between the working class of the French-speaking and English-speaking regions of Cameroon to support the struggles and democratic rights of each other. In Cameroon, the key objective is to put an end to the dictatorial regime of Paul Biya and to put an end to the capitalist system which generates suffering amid abundance.

We all need to fight for a socialist confederation of Africa, where the wealth of the entire African continent will be democratically used to meet the demands of all people. The reason for this is not unconnected to the fact that to truly achieve self-determination, it is necessary to break the chains of the imperialist nations that are subjugating them. Imperialism and Neo-Liberalism are colonialist heritage and are responsible for dividing people against themselves. Only an end to capitalism in Cameroun as well as in Nigeria, indeed in Africa and the world, can make possible the emergence of genuine human solidarity, rather than competition and exploitation as we have it.