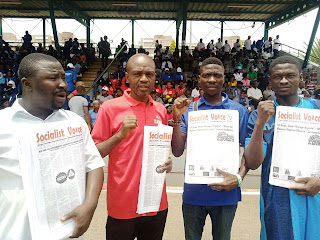 RSM comrades at May Day

Revolutionary Socialist Movement, RSM, joined the workers rally at this year’s occasion of International Workers Day. The theme of this year's rallies was “Labour Politics and the Quest for Good Governance and Development in Nigeria”. The venue of the event was Eagle Square in Abuja.

The program was supposed to start by 10am but was delayed till about 11:30am before it started with solidarity songs.

The venue was scandalously militarised by the “security” forces. At the entrance of the venue, Department of State Security Services officials were asking workers to raise up their hands before entering, for “security check”. Being there was not easy, as workers have to pass through rigorous checks due to the conditions that prevail in Nigeria of gross insecurity attacks and terror. But having said this, we need to emphasise that the DSS officers are more often than not, overzealous. For instance, they checked all banners and placards to be sure they were not raising any criticism of the labour leaders and the regime! Any such placards or banners, would be seized by the police, or the person holding them would be refused entrance.

The government policy, as announced by the Minister of Labour has been “No work no pay” for the striking University Unions. The Nigerian Labour Congress has threatened with a General Strike, to support the demands of striking University workers but the federal government has remained adamant.

At the May Day rally, it was obvious that workers are not happy with the situation they face. This was coupled with the additional frustration caused by the fact that 2023 is around the corner and politicians have started hypocritical “friendly” approaches to the working-class masses and the trade union movement. This was evident at this year’s May Day rally through the presence of the government’s vice president, prof Yemi Osibanjo as well as former and current APC (All Progressive Congress – the ruling party) chairmen, Adams Aliyu Oshiomole and Abdullahi Adamu. Also, in attendance we had representatives of the leadership of the Labour Party (LP). 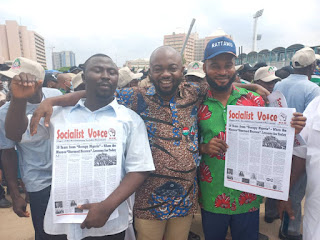 RSM and our supporters

Workers are angry with the rate of inflation, the level of insecurity in everyday life and the continuous attacks on democratic and trade union rights. At the rally in Eagle Square, the Nigerian labour leaders urged workers to vote against anti workers candidate.  But the trade union leaders haven't done enough to mobilise workers to join the labour party as a real alternative.

The TUC president Quadri Olaleye demanded urgent action aimed at curtailing the spread of insecurity, he lamented the haphazard implementation of the minimum wage, he explained the implications of rising inflation on workers’ income, and demanded concrete action on the revitalisation of the comatose refineries and reversal of the privatization of the power sector.

Early this year the two labour centres organised conferences ahead of the 2023 Elections. The RSM has called on labour leaders to build a mass working people’s political alternative. You can click here to read. http://www.revolutionsocialist.org/2022/04/nlc-and-tuc-conferences-ahead-of-2023.html

The Vice President, prof Yemi Osibanjo in his speech promised that the minimum wage will remain high on the government’s agenda and that they will take workers’ welfare as a priority. There were also other speeches from other government top officials present. Many of these speeches were appeals to the labour leaders to calm down and be patient on some issues affecting the workers.

There was nothing honest about these approaches; paying lip service to the labour leaders only revealed the fear of the ruling class towards the power of the working people once mobilised.

On April 29 the International Monetary Fund (IMF) warned Nigeria and other African countries, of the possibility of hunger-related social unrests ahead, as a direct consequence of the war in Ukraine and the impact on raw materials, grains and commodity prices. This year May Day was celebrated amidst unpaid salaries and poor wages. An explosive mood is being created. 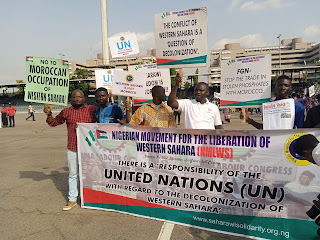 The rally ended with a demonstration by of all union affiliates and civil society groups. We were  joined by  activists from the Nigerian Movement For The Liberation of Western Sahara during the rally. Western Sahara is the last colony in Africa fighting for self-determination from the Moroccan civilian dictatorship regime. The rally ended around 5pm. 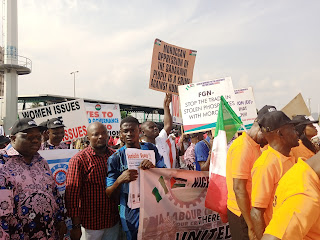