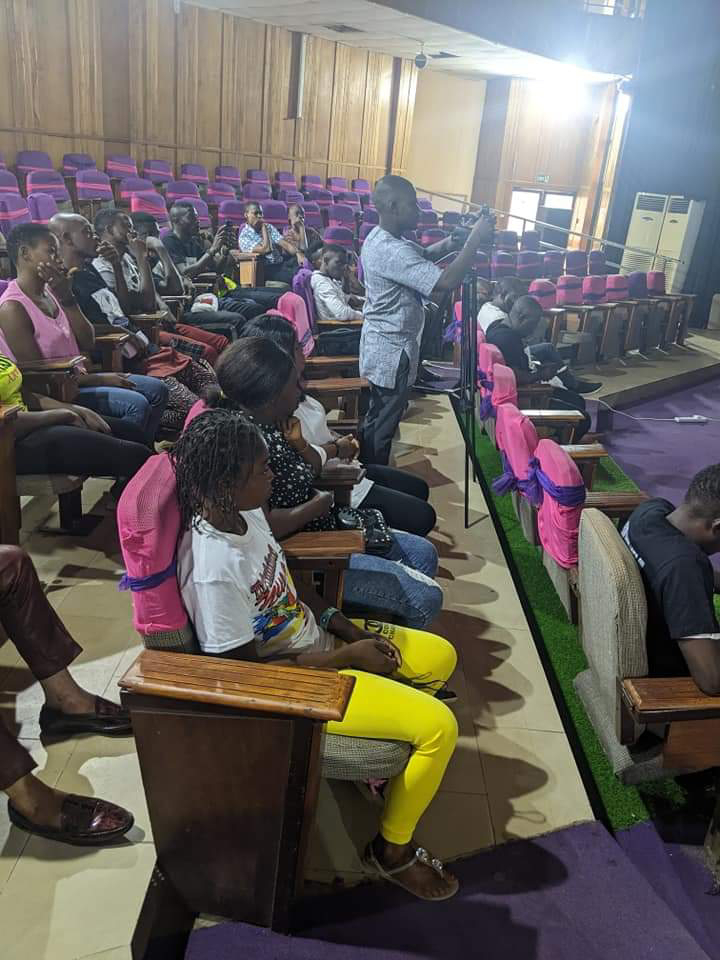 The program starterd with a solidarity song, and was followed by the opening of the tribute section by Comrade Dimeji Macaulay, the national organiser of the Revolutionary Socialist Movement (RSM). In his speech, Dimeji Macaulay said that Segun Sango’s departure was a great loss for the revolutionary movement in Nigeria, Africa and the World. Τhe consistency of comrade Sango is a lesson for the younger generations. Segun’s writings will continue to inspire us. From his student days in the University of Ife, he has been a leading voice against capitalism and imperialism. He has served in many capacities aside been the founding general Secretary of the Labour Militant, later renamed Militant and now the Democratic Socialist Movement (DSM). He has served as Joint Action Front founding mobilization officer, and he also served as Lagos State chairman of National Conscience Party (NCP) in 2003. Under his leadership, the party recorded huge success but it was taken over by the ruling party. After that he was expelled alongside other Democratic Socialist Movement (DSM) comrades. The right wing took over the party leadership from late human rights lawyer Chief Gani Fawehinmi. 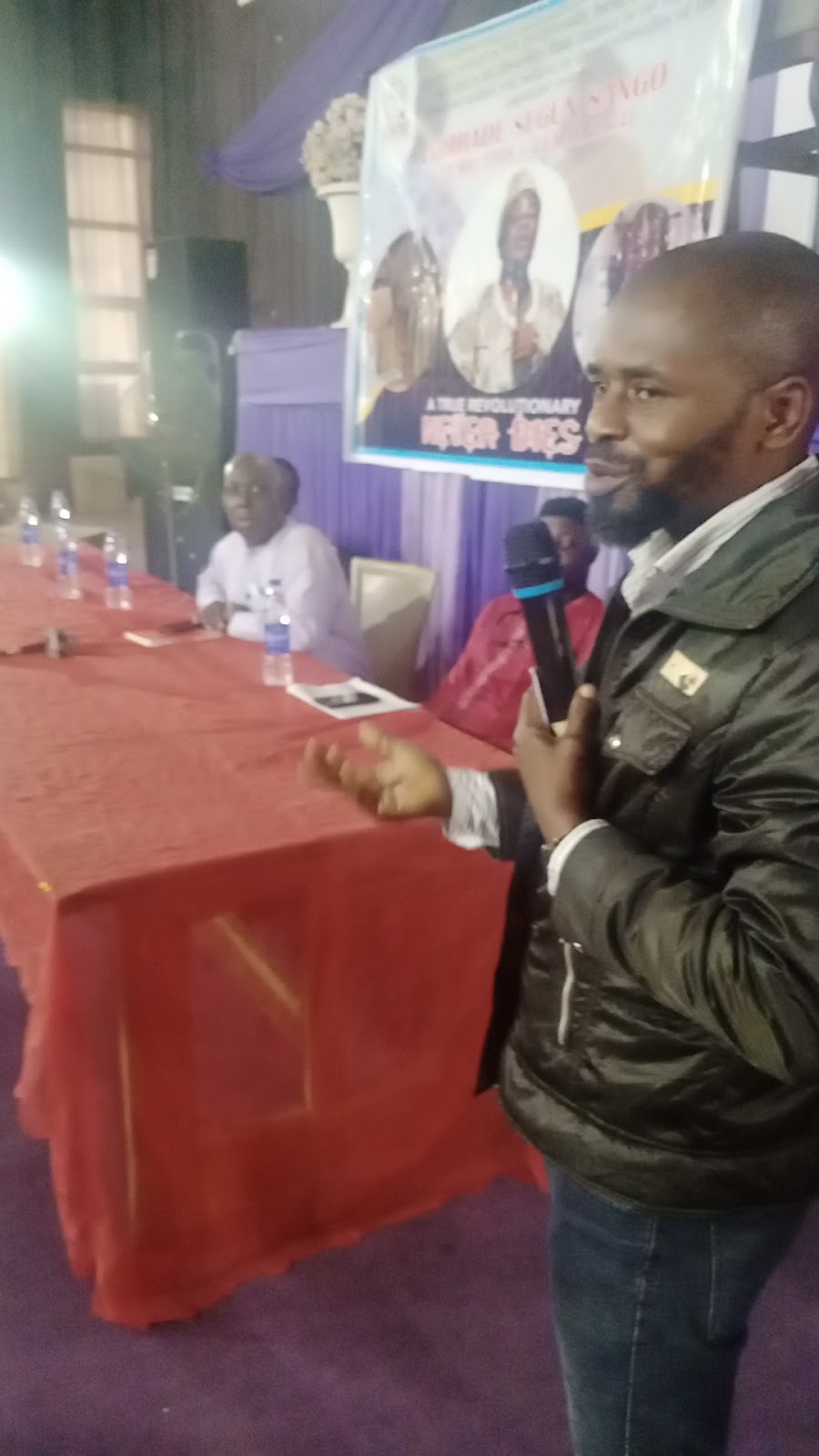 Comrade Sango was a lawyer, but he committed the largest part of his life to the struggle for a better world. Despite having one bad leg, he didn't let this distract him. He was the founding National Chairperson of Socialist Party of Nigeria (SPN) and contributed to the registration struggle until he finally fell sick. The tribute we published on his death can be read here http://www.revolutionsocialist.org/2022/05/obituary-comrade-segun-sango-spirited.html .

Comrade Martin Egbanubi, the general secretary Nigerian Union of Allied Health Professionals (NUAHP), in his tribute recalled how he meet Sango over a decade ago and the role he played as Chairman of Lagos Chapter of the National Conscience Party (SPN) and the results they got in that historic election. Segun Sango was a firebrand Marxist, an uncompromising revolutionary who devoted his entire life in the struggle. He called for the support of the Left in reclaiming the Labour Party to become a true party of the workers.

Comrade John Odah, the former General Secretary of the Nigeria Labour Congress (NLC) and presently the Executive Secretary of the Organisation of Trade Unions of West Africa (OTUWA). In his contribution, he said that he and Sango were not in full agreement on issues of tactics and method. But his consistency in the struggle for a socialist revolution in Nigeria was exceptional. When I heard about his death, he said, I was saddened and devastated. I knew comrade Sango had been unwell for some time, but it is hard to accept that he’s gone to join his ancestors. In the 80’s we had engaging encounters between our comrades in the student movement nationally. The encounters between the ALPS of Unife (now OAU) and MAAS of UniJos, of which Comrade Segun Sango was a leading light from the Alliance of Progressive Students, was one of the most profound of our generation. Though we often disagreed on methods, we had utmost respect for one another. MAAS had the secretariat of NANS in 1982/83, and handed it over to ALPS in 1983/84. Sango and the other comrades ensured that NANS stayed the course.

Sango remained a revolutionary till the end, and that is a testimony to his fidelity to the Revolutionary cause. Let us be kept abreast of arrangements for his burial. Comrade John went through the historic period in which they fought many battles together and said that there's a need for comrades to get complete documentation of Labour Congress on how to build the Labour Party. 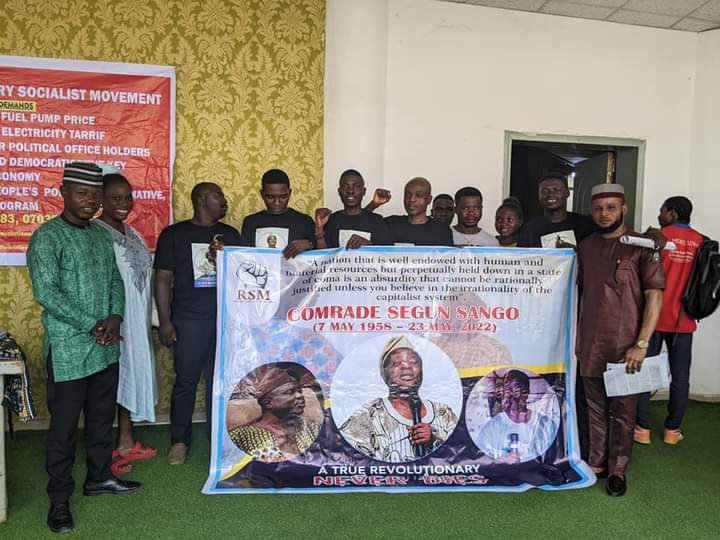 Owei Lakemfa, former Secretary General of the Organisation of African Trade Union Unity (OATUU) and former Deputy General Secretary of Nigeria Labour Congress, in his tribute remembered that when Segun Sango joined the movement in the university campus in the 1980s, he was very exceptional and very energetic and committed to the cause. He became one of the clearest headed among his peers. It's not easy to be disciplined in Nigeria, because of family and society pressures. But Sango stood out and fought until his last breath. He visited me in Ghana to discuss issues around the Socialist Party of Nigeria (SPN), although I didn't agree with him- I think you can't form party for the people, you need to first get people organised and then form a party.  I think there's need for more mobilization to salvage the country.

Comrade Idown Adeshina Ejo in his tributes talked about how he met Segun Sango, who was known for many pro bono cases for victimized students. Comrade Segun attended many public programs and was many times a lead speaker in their school in those days.

Comrades that made contributions at the event were Marshall from More Action Talk Less, Juwon from the Africa Action Congress, Lenin from the DSM and Che from Cuba Solidarity Group.

In his closing remarks, Dimeji Macaulay explained why objectively there's room for a revolutionary party, that can be an example and campaign for a mass workers party. The short experience with SPN shows that we can use election periods to build, agitate, organise, recruit and canvass for our socialist ideals. We need a revolutionary party that will stand with the oppressed working-class people and participate in their daily struggles.

In all, about fifty people attended the event, even though some of the speakers couldn’t make it.