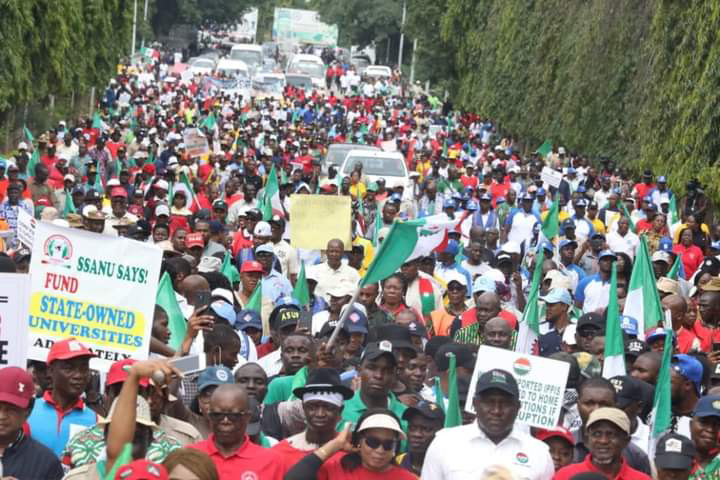 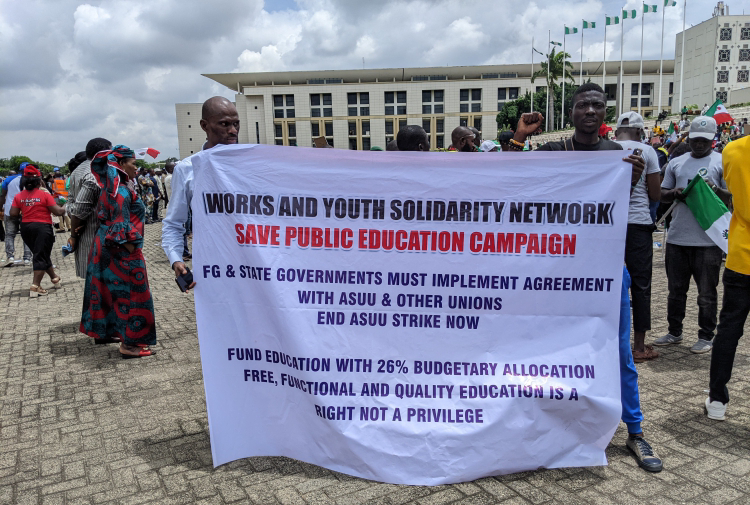 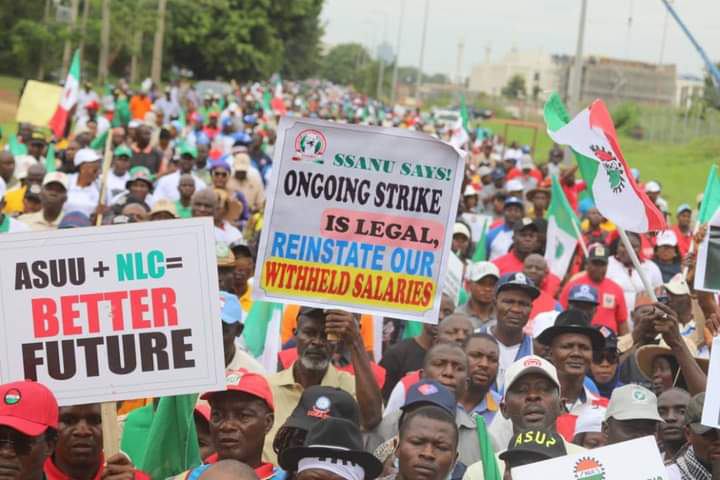 Some placards raised by protesters
The protest was a warning to the federal government (FG). Pressure is being mounting to force the FG to meet the demands of ASUU and the other unions and reopen Nigerian universities, which will allow students to return to the classrooms for academic activities.
Thousands of protesters took the streets in the Federal Capital Territory (FCT), Abuja, against the continued shutdown of Nigerian public universities on Wednesday. A number of public figures were also present in the march; the President of the Nigeria Labour Congress, Ayuba Wabba; former Senator Shehu Sani; Omoyele Sowore; and the Country Director of Actionaid Nigeria, Ene Obi. The national leaderships of all the striking unions were also present.
The protesters, who had converged at the Unity Fountain, a popular protest ground in the capital, matched to the National Assembly, chanting solidarity songs and carrying banners and placards bearing various inscriptions stating their demands.
Members of the Revolutionary Socialist Movement (RSM) https://www.facebook.com/revolutionarysocialistrsm/ participated in this protest with our campaign banner Workers and Youth Solidarity Network and our newspaper Socialist Voice, which got a lot of acceptance from the workers and students.
This was the second day of the two-day nationwide protest declared by the NLC, the umbrella body of workers unions in Nigeria. Protests were also held across the country on Tuesday, June 26. They were massive and peaceful, showing that young Nigerians are determined to fight on. With the economic situation in the country, angry Nigerians want to put an end to this government as soon as possible.
Various state chapters of the unions had mobilised their members, parents and allies on Tuesday to kick off the two-day protest. They presented a list of demands to the state governors for onward delivery to president Muhammad Buhari.
On Wednesday, from early hours, protesters at the National Assembly claimed that the five-month industrial action by the university workers is a contributory factor to the worsening of the security situation across the country.
Opening the protest on Wednesday, NLC president Ayuba Wabba said “We will take our destinies in our own hands and that of our children, which is very important and fundamental’’ and added “We will not allow political elites to destroy the future of millions of Nigerian youths’’.
“We would not be tired”, “Save Education, Address Issues Now”, “We are Tired of Unfulfilled Promises” were, among others, some of the inscriptions on their banners.
NLC President Ayuba Wabba, while addressing the protest at Unity fountain in Abuja, explained how the government had agreed to pay a revitalisation fund of N200 billion yearly, but failed to fulfil this agreement.
The major demands by all the striking unions include a better welfare system for their members and improved funding for the universities. They also demand the rejection of the Integrated Personnel Payroll Information System (IPPIS) as a payment platform for the workers.
The striking unions have consistently accused the Nigerian government of unfulfilled pledges, saying they could no longer bear the brunt of the neglect of the nation’s education sector.
ASUU President, Emmanuel Osodeke, said that by the National Universities Commission (NUC’s) regulations, the ratio for lecturers to students is 1:9 in medical and science schools and 1:15 in the humanities and social sciences. But that the reality on the ground is unimaginable.
He said “In our universities today, there is one teacher for over 1,000 students! … So, we need to let them know that they don’t have dominance over us. Universities are universal. Our universities used to have foreign students. You are a child of a governor, you sit and learn with the child of a driver. Eat in the cafeteria together. Stay in the same hostel. Today, it is not like that”.
The ASUU President in his speech accused a former Pro-Chancellor of the University of Lagos (UNILAG), Wale Babalakin, of attempting to commercialise education in Nigeria.
Babalakin, who led the negotiation team between the government and ASUU from 2017 to 2020, when he angrily resigned, was accused of high handedness, even though he has consistently denied this.
Osodeke added that the union’s protest against IPPIS has been proved right by the fraud allegations against the disgraced Accountant-General of the Federation Ahmed Idris.
“We have been vindicated by what happened to the accountant general,” said Osodeke.
The protest ended at around 12pm, with a promise that if the government failed to fulfill the demands of the unions, the NLC is going to embark on a 3-day general strike. We sang solidarity songs and chanted slogans for the struggle.
Consistently, through our campaign platforms, we have issued press statements and press conferences in support of the striking unions. We also salute the Nigeria Labour Congress for this solidarity protest. If the NLC is sincere in calling for a 3-day general strike, it should organise it properly, building a campaign in neighborhoods and factories all over the country, convincing workers to strike. It should combine the demands of the university strike with demands to counter the cost of living crisis and the security issues. In that way, we can build a front of all workers and youth against the government.
at July 28, 2022