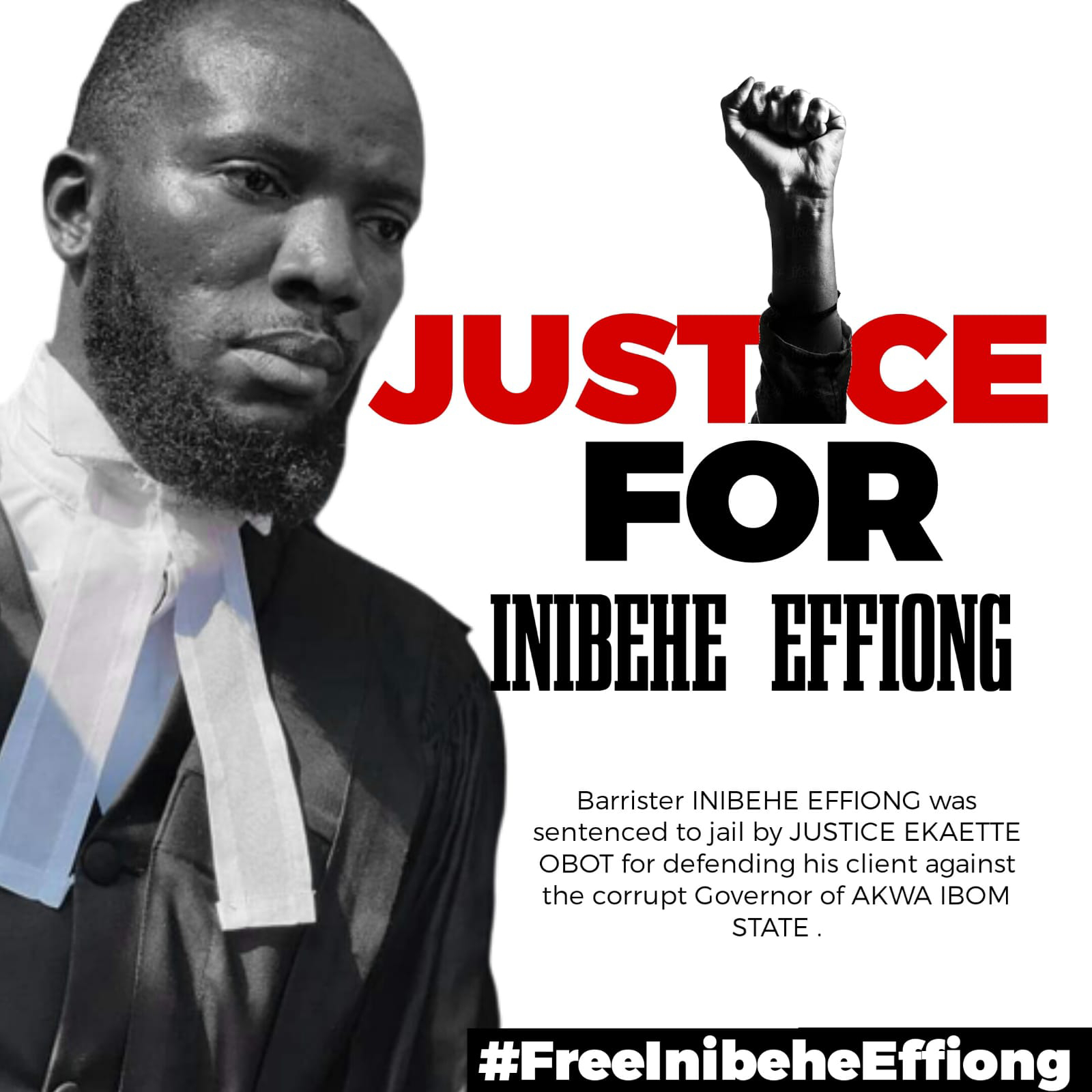 Press Statement
FREE Inibehe Effiong NOW
NO TO POLITICALLY MOTIVATED JUSTICE SYSTEM
WE CALL FOR PUBLIC ENQIURE TO INVESTIGATE ILLEGAL REMAND OF INIBEHE IN PRISON
The Revolutionary Socialist Movement (RSM) Condemns the continue remand of Inibehe Effiong an activist and legal practitioner, who was remanded in custody on the order of the Chief Judge of Akwa Ibom State on account of alleged contemptuous conduct in Her Lordship’s court.
Mr. Effiong, was at the court on that faithful day to represent his client one Mr  Leo Ekpenyong in the defamation case with suit numbers HU/279/2019 and HU/273/2019, instituted by Governor Udom Emmanuel of Akwa Ibom State and Senator Bob Effiong, was  bullied by Justice Ekaette Obot and subsequently action that follows result in her Lordship to remand Mr Inibehe.
The RSM holds strongly that this is undemocratic, it’s not civil, it is primitive and a sign of danger for young professionals such as Mr Inibehe. Mr Inibehe is a victim of state brutality and we will not allow it to go with questioning. We do not agree that opposition to government under civil rule should be resist with such actions carried against Mr Inibehe.
Inibehe Effiong Incarceration further revealed how undemocratic our society is and the level at wish some individuals in post of authority wants to live a life of untouchable and unquestionable. It portend evil to the entire society when young people are victim of oppression and repression and were not allow to resist.
Attempt has been made by the Nigeria Bar Association (NBA) with the Chief Judge indicating that she was unwilling or unable to further entertain the matter.  This is arrogance and abuse of office by the Chief Judge.
To us in the RSM no matter the conduct of Mr. Effiong in the courtroom while trying to defend his client, which is constitutional. The reality before us is also that Justice Ekaette Obot did not follow due process to carry out her actions.  According to the Nigeria Bar Association (NBA) President
"Mr. Effiong was not put in the dock, told what his wrong or contempt was, given fair hearing or even an opportunity to recant or purge himself (a courtesy that the Bench should, at the minimum, extend to counsel where counsel’s conduct is said to be contemptuous). "This on its face not only runs afoul of known practice and procedure in such cases but is also unconstitutional”.
We salute the NBA for intervening so far in the matter and we extend solidarity with the NBA at this period. We will continue to call for immediate and unconditional release of Mr Inibehe. We call on people of good conscience and civil society groups to join us in demanding immediate unconditional release of Mr Effiong.
We call on the National Judiciary Commission (NJC) to call for public enquiry on this matter to investigate the injustice melted on Mr Effiong and also sanctioned such a political judge that determines to ruin young people carrier on basis of political difference.
The RSM will continue to  be in solidarity with all oppressed people.
The people united can never be defeated.
Salako Kayode
Publicity Secretary
RSM
at July 29, 2022