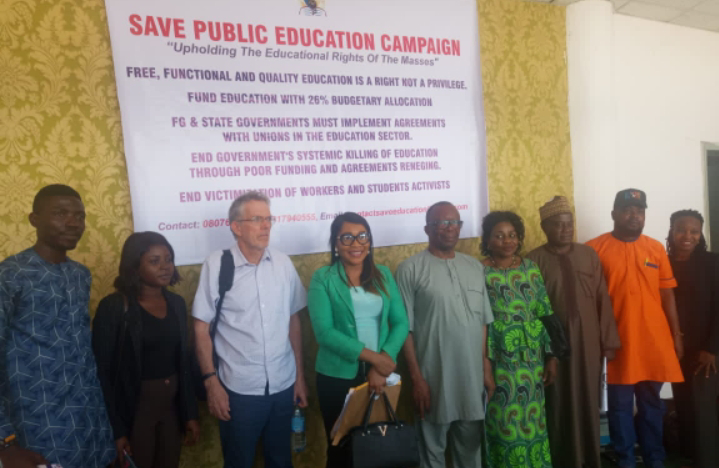 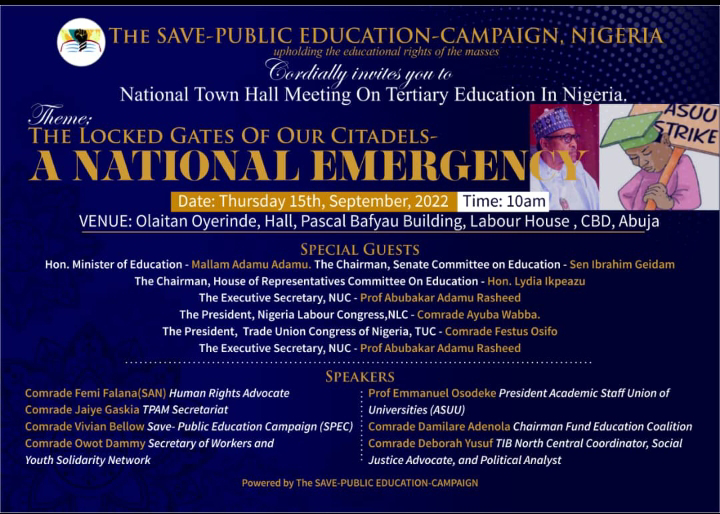 Banner  of the event
The Save Public Education Campaign, a broad platform in which the Workers and Youth Solidarity Network participates, organised a National Town Hall Meeting on Thursday, September 15th, 2022. The meeting was on Tertiary Education in Nigeria and was titled “The Locked Gates of our Citadels”. It was held in Olaitan Oyerinde Hall, Paschal Bafyau Building Labour House, Central Business District, in Abuja. The meeting was part of an effort to continue piling pressure on the government to meet the demands of Academic Staff Union of Universities (ASUU).
ASUU embarked on a strike since February and the strike has lasted for over 200 days without any end in sight with the way the Federal government has handled the matter. Nigeria students have independently organised series of protests in Universities and major towns. The Nigeria Labour Congress (NLC) has also organised a two day nationwide protest in solidarity with ASUU in July. NLC has also threatened a three day general strike if the federal government refuses to meet ASUU demands, but this hasn’t been implemented until now. So many workers unions have joined ASUU in solidarity.
The Town Hall Meeting had presences of comrades from different organizations and Trade Union Activists. The Minister of education also sent a representative to listen to what was said. The program started with solidarity songs. 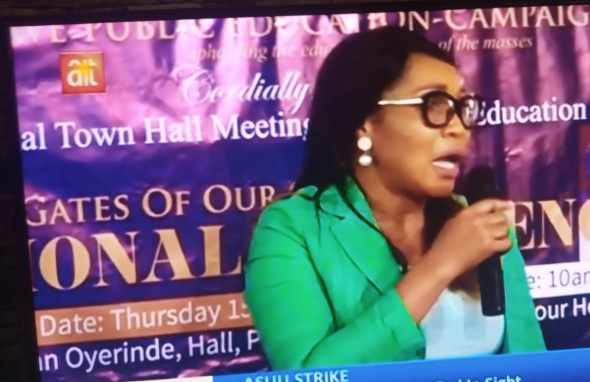 Comrade Vivian Bello
Comrade Vivian Bellow, the co-convener of the Save Public Education Campaign, while declaring the event open, declared her support for ASUU and also expressed her bitterness on the continuation of the strike. She said she worries about how the government hasn't been responding to ASUU and further said that there is a need to declare a state of emergency in the education sector in Nigeria.
Bellow appealed to the government and ASUU to resolve the industrial dispute for the sake of the students and the growth of the country. She extended her solidarity with ASUU and the called on the government to do what is needed to get Universities opened so that millions of students can return to school.

Professor Emmanuel Osedeke ASUU President speaking during the event
President of ASUU
The President of the Academic Staff Union of Universities (ASUU), Professor Emmanuel Osedeke, debunked the rumors that he has a daughter that just graduated University of Chicago in the US. He said he has four children but none of them are female. Two of his boys are presently affected by the ASUU strike.
He explained the history of the strike, the previous agreement between ASUU and the government and how the government has failed to implement it. He further expressed concern about the Tertiary Education in Nigeria as no Nigerian university ranks among the first 1,000 in the world. He said the union is willing to call-off its seven-month strike if the government is willing to negotiate and come to a reasonable agreement.
He expressed his bitterness about the state of Nigerian universities as he defended ASUU’s stance in continuing with the strike to ensure that its demands on the revitalization fund, Earn Academic Allowance, proliferation of universities, renegotiation of agreement, amongst others, are achieved. He said the strike is for the betterment of the nation as ASUU does not want to produce quacks and cracks into society.
“We’ll be committing suicide when we walk into any Nigerian hospital in the next few years if we don’t do anything,” Osedeke said, adding, “and so the union is looking at having a university system where adequate equipment would be made available and the ratio of lecturer to student is 1-5 as opposed to 1-30/50 we have now.”
He lamented the government’s lack of priority on education which he said is bleeding the country financially to the tune of 1.6 trillion naira annually, as tuition fees going to other countries in contrast to the 1.3 trillion naira the union has been demanding for, for the past six years.
He said Nigeria has 98 public universities and 111 private ones but 95% of Nigerian students study in public universities. In his words, “a university is a place where students come from every quarter for every kind of knowledge, a place where inquiry is pushed forward and we’re trying to kill that in our universities.”
The ASUU president said that following an agreement in 2014, the government agreed to pay a certain amount of public money within a space of six years. “They paid only for the first year, and only 50 million naira has been released since 2015.” That has led to a situation where ASUU is considering to limit the number of newcomers at the university in order to uphold the quality of education for the ones already studying.
He said he got a court summon yesterday, reiterating that suing the union is not the best way to resolve issues in contest. If lecturers are forced back into classrooms, it’ll be to the detriment of the students and the nation at large. He vowed his determination to win the strike. 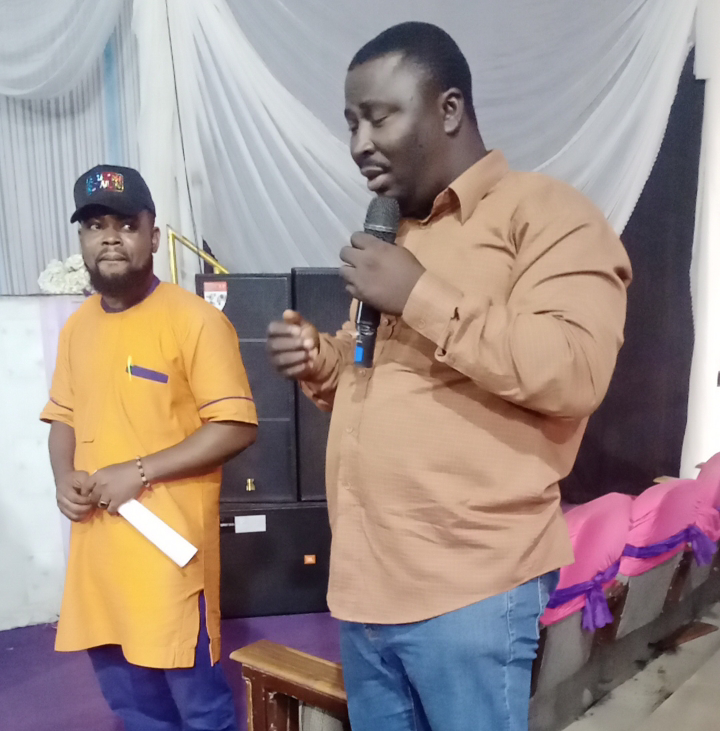 Comrade Dimeji speaking during the event
Comrade Dimeji Macaulay
Dimeji Macaulay, co-convener of the Save Public Education Campaign and member of the Revolutionary Socialist Movement (RSM), saluted ASUU for remaining steadfast in the struggle despite intimidation and attacks they face, as their salary has been stopped. He further said that the Nigerian ruling class are puppets of the World Bank and supporters of neoliberal policies. Nigeria is so rich in both human and natural resources. We have enough to fund education, health and also meet the demands of ASUU. He called for total support for the ASUU strike by Nigerians and he said the campaign will continue to advocate unrelenting principled support for ASUU and support workers in struggle for better working conditions like doctors, electricity workers and other universities staff unions. Nigerian resources are been looted every day. Some capitalists are so rich that they have more wealth that the state they govern. Different sections of the ruling class have amassed Nigerian resources to themselves. They spending millions of dollars to win their party primaries and spend huge amounts on campaigns to win political offices.
He called on ASUU to mobilise Nigeria to take the streets and build a mass working class political alternative. If we have a political alternative and mobilise for power, we can be sure of funding of education, ASUU won't need to go on strike and then doctors won't go on strike, elected officers will earn the average worker’s salary as opposed to the jumbo pay they earn now. Only a socialist government can guarantee us a better future and a meaningful life.
Macaulay added that the only reason we're suffering and have endless strikes in every sector, is because the wealth of society is in the hands of individuals that subscribe to the capitalist doctrine. It's time for general strikes and mass protests to force the government to meet the ASUU demands, so that students can resume back to campus.
Discussion
Drew Povey argued that to win the ASUU strike cannot be a sit at home - strikers have to hold townhall meetings, visit other trade unions, organise protests etc.  It has to be an active strike like the one in Kaduna in May 2001 when the NLC brought one of the most powerful governors to their knees in only three days. 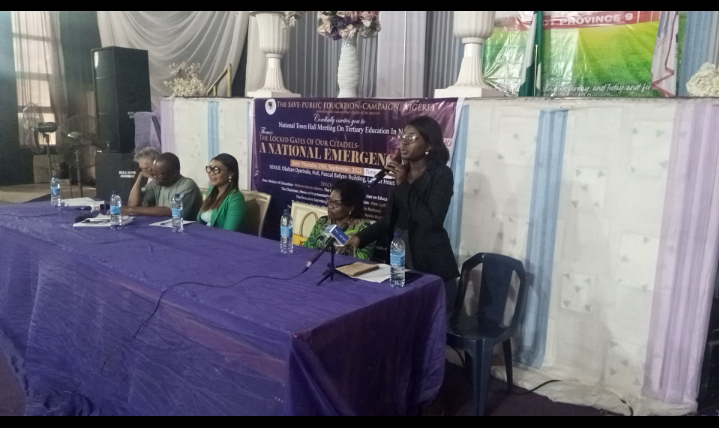 Comrade Deborah Yusuf
Comrade Deborah Yusuf, as Take It Back (TIB) North Central Coordinator, a  Social Justice Advocate and political analyst, in her contribution called on ASUU to step out to educate the public so that they can get support from the populace. She expressed concern about the attack on lecturers by stopping their salaries in order to force them to work. As a post graduate student and a daughter of a lecturer, she understands the pains and the implications of strikes on her family and her studies. She called on the Nigerian people to support the ASUU strike because it's about saving public education from total collapse. She added that she believes that ASUU demands are what the government can meet if they're sincere about improving Nigerian universities. She recounted how billions were stolen by the Accountant General of the federation and endless corruption in the political system. 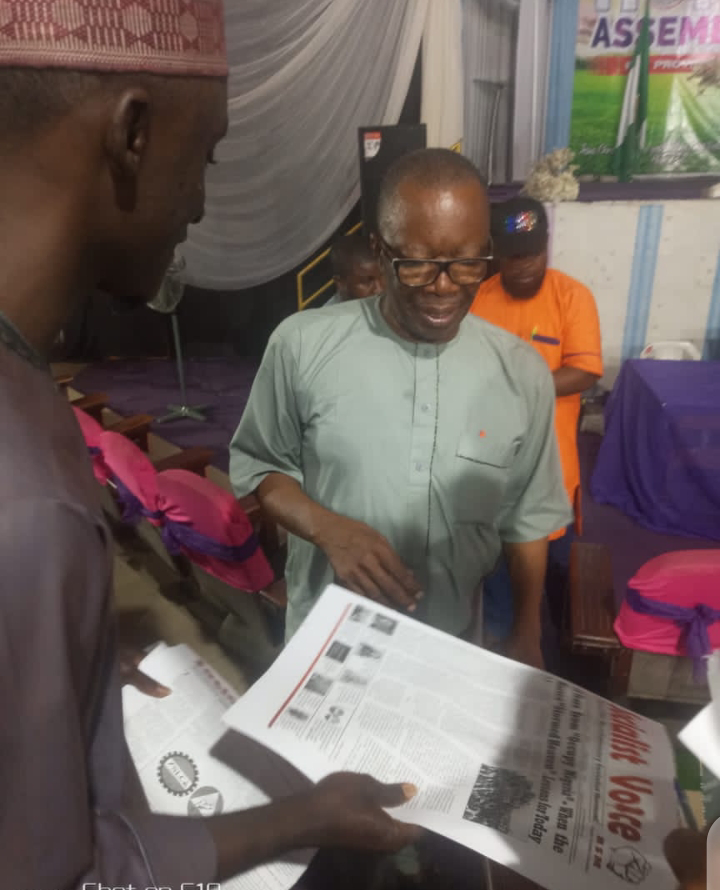 Michael Bakare, member of African Action Congress (AAC), in his contribution called on Nigeria to stop voting for those who spoiled Nigeria before. He said the endless corruption in Nigeria is responsible for the crisis in Nigerian Education Sector and the crisis by extension of the entire Nigerian society. What we need is to mobilize for revolution.
The participants in the Town Hall Meeting resolved to continue to support ASUU and build the movement until victory.
About sixty people attended the program.